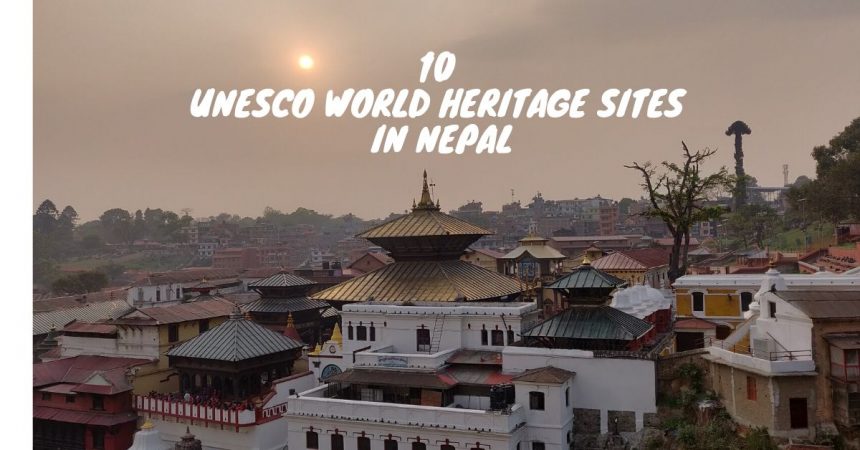 Nepal is an abode to 10 World Heritage sites: 7 in Kathmandu valley and Lumbini, Sagarmatha National Park, and Chitwan National Park. Kathmandu, the “City of Temple,” encompasses numbers of medieval temples that hold religious and cultural significance for decades. Pashupatinath, one of the most important sacred sites for Shiva’s devotees, Boudhanath, one of the largest stupas in the world, and Swayambhunath, the holiest place for Buddhists, offering a vivid view of entire Kathmandu, are sacred places for devotees.

One of the 10 UNESCO world heritage sites in Nepal, Changu Narayan Temple is believed to be the oldest temples in Nepal. It is located in Changu or Dolagiri, shrouded by a forest of Champak tree. There are four entrances, guarded by animals on all side – Elephant, lion, ram-horned griffon.

The temple is built in the two-tiered Pagoda style with roof embellished with ten incarnations of Lord Vishnu and Tantric deities. Built in Lichhavi Era (4th Century), Changu Narayan is believed to date back to 464 AD.

Lumbini, a Buddhist pilgrimage site, is the birthplace of Lord Buddha and one of 10 UNESCO world heritage sites in Nepal. It is one of the world’s spiritual sites, located in the Rupandehi District of Nepal. Lumbini houses Mayadevi Temple, the main temple at Lumbini.

Besides, there are many old and new temples, monuments and a museum.The Ashoka Pillar in Lumbini was built by Indian Emperor Ashoka in 249 BC. Hundreds of tourists visit Lumbini to pay reverence to Lord Buddha and revel in the peaceful aura.

Confused where to get the best shot for your Instagram?- stand before the Nyatapola Temple, and you will be amazed to see your image. And not to mention, click some pictures of Newari people doing pottery.

You can stroll around and relish the laid-back ambiance. The historic town in Kathmandu, Patan Durbar Square, is definitely a beautiful place for your Instagram grid. The artistic heritage, exquisite carvings, and elegant architectural treasures of Patan Durbar Square is what lures the travelers. Besides, the museum and bustling market in its close proximity appeals for a refreshing walk.

Have you ever dreamt of riding on elephants in a jungle? The Chitwan National Park of Nepal is the reality of your dream. The green forest sought a variety of wildlife and more than 543 species of birds, including endangered and migratory birds.

You can stroll and enjoy the thrilling jungle walk at your own pace, but Elephant safari is the most convenient way to enjoy the natural wildlife. Meanwhile, you can also opt for Jeep safari. The canoe ride is another attraction at Chitwan National Park, where you float on the river by dugout canoe and enjoy the colorful birds perched in the branches of tree and crocodile basking by the river bank.

Bathing and swimming with an elephant and Tharu cultural show in the evening are enticing highlights while enjoying days at Chitwan National Park.

Did you know Sagarmatha National Park is the first national park that was declared as a UNESCO World Heritage Site of Nepal? Established in 1976, Sagarmatha National Park is one of ten UNESCO World Heritage Sites in Nepal. The park is home to some of the endangered animals like snow leopard, musk deer, red panda, Himalayan black bear, to name a few.

Sagarmatha National Park is also an abode to more than 100 species of bird, a true paradise for bird-watching at such altitude. Himalayan monal, blood pheasant, red-billed chough, etc. are some birds one can see. The park boasts pine, oak and rhododendron forests.

From the park, you can enjoy awe-inspiring views of towering peaks like Lhotse, Cho Oyu, Thamserku, Nuptse, Amadablam, and Pumori. The diverse landscape, rugged terrain, and massive rocks will surely excite you. The pleasant hike to Sagarmatha National Park adds excitement for your further adventure to Everest Base Camp.

Boudhanath, residing in the center of Kathmandu, is just 2.2 miles away from Tribhuvan International Airport. It is one of the largest spherical stupas in the world with a massive mandala. It is considered an important place of meditation for Buddhists and is the largest stupa in Kathmandu valley.

Surrounded by countless monasteries, it is the center of Tibetan Buddhism in Nepal. Once entered from the main entrance, you will see a white dome with a golden spire that has Buddha’s eyes overlooking the city. The prayer wheels installed around the stupa are for spinning and sending prayer and mantras to heaven.

If strolling is not enough, you can enjoy the beautiful view of the stupa with a sip of tea/coffee from the nearby restaurant and cafe.

When Kathmandu was believed to be a lake, Swayambhunath was an Island. Swayamnbhunath perched on top of the hill is also known as Monkey temple that offers a splendid view of the entire Kathmandu. It is a highly recommended place if one wishes to have an overview of the Kathmandu valley.

It comprises large stupa with Buddha eyes gazing sleepily, surrounded by small temples, chaityas, and numerous other religious objects. The long inclined stairway that runs the forest is inhabited by hundreds of monkeys, which give rise to its name (monkey temple). Huge numbers of prayer wheels around the stupa are spun by devotes to release prayers and mantras to heaven.

The prayer flags strung along the top of stupas fluttering in the wind are believed to emit positive spiritual vibrations. Swayambhunath, a place of peace and prayer and is a holy shrine for Buddhists.

Only 1.3 miles away from Tribhuvan International Airport, Pashupatinath is the most sacred religious site of Hindus. It is the largest temple complex of Nepal and offers a religious, cultural, and spiritual experience to every visitor. There are around 492 temples, 15 Shivalayas, and 12 Jyotirlinga with more than 100s of shivalinga within the complex.

The holy river Bagmati flows divinely, and when one bathes in it, people believe in having washed their sins. It is also a holy place for Hindus cremation, Lord Shiva’s consort Sati Devi, a celebration of Maha Shivaratri and day to day evening Aarati. One of the world heritage sites, Pashupatinath temple, has been the most important religious site since the 5th century.

There are many small temples built in the pagoda style and embellished with intricately carved exteriors. This place is also the center of the celebration of major festivals like Indra Jatra, Gai Jatra, and several others. In recent years, people have gathered here for the celebration of the color festival (Holi.)

Once entered from the main entrance, you will find a big open space where you will see street vendors selling Nepali gift items, arts and artifacts or ornaments, jewelry, and statues. If you have enough time, you can enjoy Hanuman Dhoka Museum and view rare photographs and paintings of Shah rulers.